By invitation, The RFID Network visited a remote facility in northern Virginia to see a demonstration of an Intelligent Perimeter Defense system deployed by the FBI that uses both overt and covert Radio-Frequency Identification (RFID) technology to track people and assets. The system combines high-resolution video surveillance and RFID for identification, tracking and tracing, overlaid in real time on a facility map to show the movement of people and assets. The system allows security officers to see theft as it happens, even if the stolen object is inside a briefcase, under a jacket, or stuffed inside a sock.

Using RFID to track people and assets is exactly what many privacy advocates fear: Big Brother tracking us with spy chips. As Orwellian as this solution sounds, the undisputed fact is that this system catches thieves and does so at a fraction of the cost of traditional security solutions. Louis Sirico, The RFID Network TV Series Host, interviewed Mr. Carl Brown about how RFID catches criminals in the act.

What makes the this system different from traditional security systems is that it uses UHF RFID for clandestine surveillance: UHF RFID readers are hidden inside walls, floors, and ceilings; UHF RFID tags are discretely placed; and only the security personnel know where the system is in place - until the thief gets caught. Then, all the thief knows is that he or she was caught in the act, on video.

"It takes a criminal twelve seconds to defeat a lock or fence. Yet, we spend hundreds of thousands of dollars to create fences that only provide an illusion of security. This system creates a virtual perimeter that tells us who is penetrating the perimeter, when they are doing it and, where it's happening. With this information, we can respond with the appropriate level of force and prevent further penetration.""A commander with the Naval Criminal Investigative Service (NCIS), who asked to remain anonymous for this article and would not be interviewed on camera."

There is serious motivation behind the development of systems like this one in both the government and private sectors. The reality is that traditional security systems are simply not proving to be effective against criminals. Beyond the obvious homeland security concerns, the technical team behind this deployment places strong emphasis on the impact to our national economy and business.

Employees steal about a billion dollars a week from their employers...

According to Static Brain, $50 billion per year is stolen from U.S. businesses by employees, 42.7% of Inventory Shrinkage is a result of employee theft. While only 35.6% is a result of shoplifting.. Simply stated, companies are more likely to be ripped off by employees than non-employees. It takes $20 billion dollars in sales every week just to cover the losses. That's a yearly economic impact of one trillion dollars. The U.S. Chamber of Commerce estimates that one of every three business failures are the direct result of employee theft.

Yet, most companies are embarrassed to talk publicly about how serious this issue really is. They try to deal with it quietly by spending money on traditional security systems. The most shocking statistic is that even with all the money companies spend on security, 80 percent of all employees will be tempted to steal if given the opportunity, according to the FBI.

Privacy advocates will have an extremely difficult argument when facing numbers that motivate government and big businesses like these do. The Team Director commented, "Our mission is not to invade privacy, simply protect the innocent. RFID is just a tool in our system. If RFID wasn't available, we would tag by other means such as scent, chemicals, or dyes -- and, in actuality we do. The right to privacy is important but privacy and anonymity are different. All RFID does is help prove what you did."

In less than 4 years, the RFID solution has been deployed by over 2,000 businesses and the government including: the FBI, CIA, NSA, Drug Enforcement Agency (DEA), Environmental Protection Agency (EPA), US Department of Defense (DLA), as well as the US Army, Navy, Air Force, and Marines.

The system uses video surveillance cameras mounted in obvious locations and others that are hidden. I was surprised to learn that security personnel no longer need to sit and watch the video monitors; the RFID tags provide a far superior means of triggering alerts. A tag read in a particular location automatically triggers video recording and sends an instant alert to the security personnel's mobile devices. In the demonstration, an Android mobile phone received a message that linked to high definition photo of a theft in progress. A screen capture of the Covert Surveillance Operations Center (below). 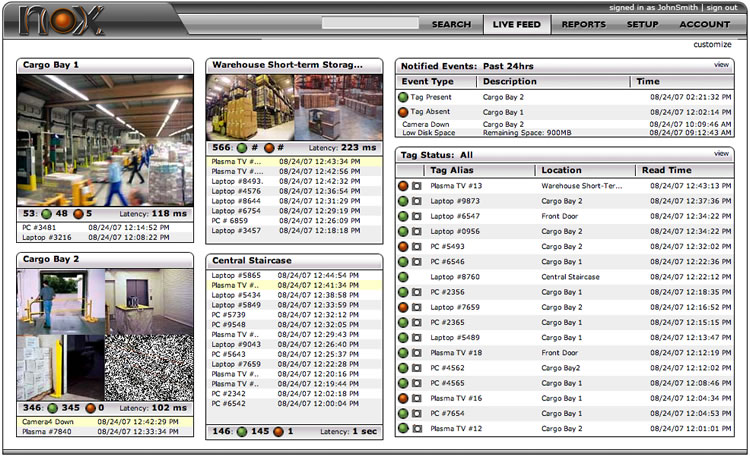 The areas being monitored include perimeter doors, staircases, cargo bays, storage areas, trash dumpsters, and even bathrooms. These locations were identified as prime locations for employee theft. The system generates a security alert when an RFID tagged asset enters or leaves any of these areas. Of course, not all areas use video. The bathroom is a perfect example. The system sweeps the bathroom with RF to determine what went in and came out. Video is used to capture when people enter or leave the bathroom.

According to Mr. Brown, after RFID tracking is installed, "there are no thefts". The combination of overt and covert RFID tagging is intimidating enough to prevent people from stealing.

Although it’s not commercially available, the technology exists to put an antenna directly on an RFID chip and read them from a short-range. In a high-security facility, antennas can be embedded directly in the floor. RFID chips can be sprinkled on floors. Since they are so small, it's very difficult to see them. People unknowingly pick up the chip on their shoes as they travel through an area. The software combines the video surveillance and RFID information to create an association between the chips on the shoes and a person. This allows the person's movement to be tracked around a facility without the person ever knowing he or she is being tracked. While a criminal can easily defeat the motion sensors, this kind of solution provides covert security with instant alerts when someone enters an area, plus a complete history of exactly where each person traveled and when. Certain facilities are not limited by FCC regulations, which allows the system to overcome some of the limitations facing traditional RFID tags and equipment. 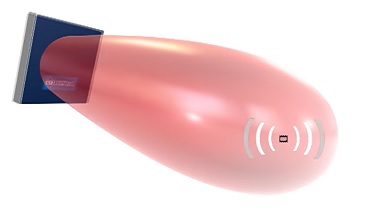 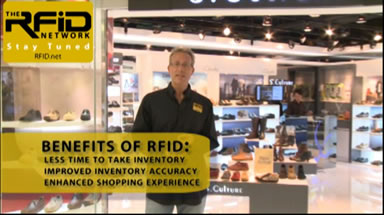