How to Install a Real Time Location System (RTLS) 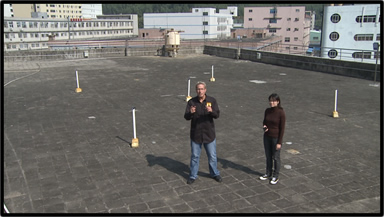 Chances are, you've never setup a Real Time Location System (RTLS). Convergence Systems Limited claims that their CS5000 series RTLS achieves one (1) meter accuracy and can be setup in under an hour, all for less than $5,000. Based on what our team has seen with other real time location systems, we are extremely skeptical. In this edition of The RFID Network we’re going setup, and test, an RTLS.

What are the Components of a Real Time Location System

A Real Time Location Systems or RTLS typically refers to a collection of sensors that work together to automatically identify and track the location of objects (including people) in real time. The CSL RTLS is comprised of the following (click on any of the below links for specifications and technical data sheet): 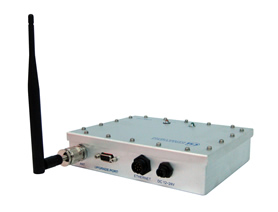 Readers, also referred to as anchors, perform ranging and provide a known location reference point for tags. There are master anchors and slave anchors. This system has models of anchors for 180° and 360° ranging.

Master readers / anchors perform tag ranging and transfers all the ranging data collected by the slave anchors back to the server running the location engine software. It is connected to DC power and and Ethernet port or to a Power Over Ethernet (PoE) port alone (click below for product data sheet): 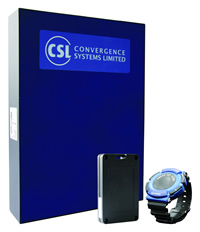 In this video, our team sets up and tests a base system which includes the following components:

For the indoor tests, we add an additional two (2)CS5111LP slave reader/anchor units.

After this video was produced, we evaluated the RTLS again using 180° and 360° anchors, as well as the updated location engine software. Additionally, the output power has been doubled compared to the original anchors, which allows better penetration in complicated environment, such as our indoor environment. The maximum number of anchors per cell has been increased from 8 to 256 and is now capable of tracking up to 65,000 unique tags. Using the portfolio of anchors, and these enhancements, significantly larger areas can be covered.  Here the configuration tested that covers 900x600 meters: 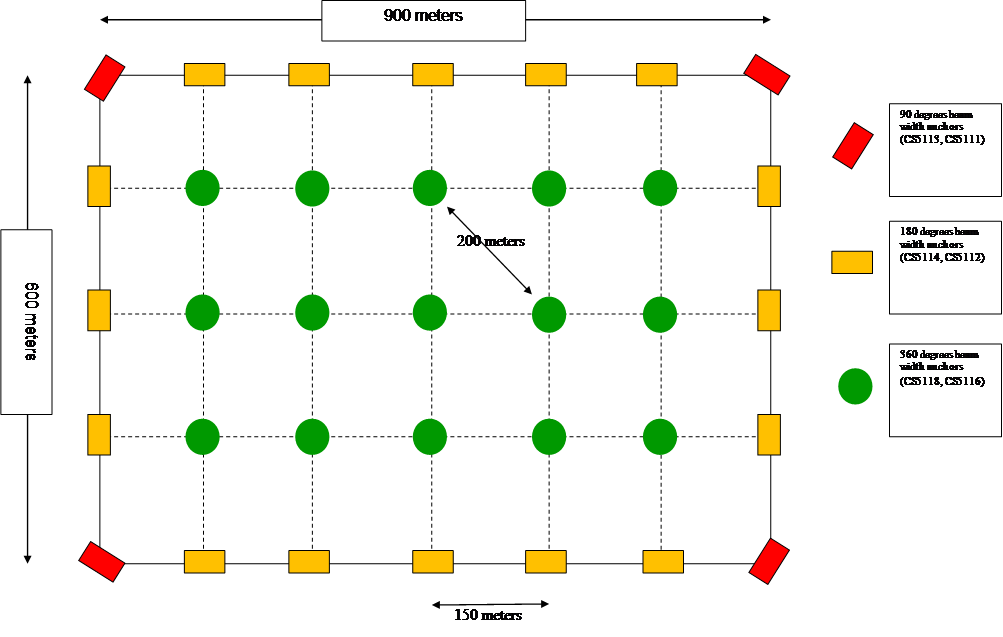 What's not included in the starter kit, but highly recommended by The RFID Network:

This particular real time tracking system operates in 2400 – 2483 MHz ISM license-free band and uses True Time-Of-Arrival (TOA) for location determination. There are a two common alternative methods used to determine location in other RTLS and active RFID systems: Received Signal Strength Index (RSSI) and Time Difference Of Arrival (TDOA), which we explain in the article: Wi-Fi ID: How it Works. The primary benefits to a TOA based location system are: 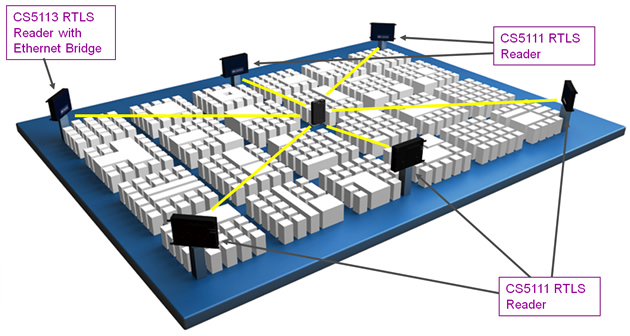 As Dr. Lai states in the video, the location engine uses simple TOA algorithms, which transform the raw data from the anchors into X, Y location coordinates. The terms most often used to describe this process of transforming the raw data into location data is "triangulation" or "trilateration". "Tri" referring to three because if the raw data from at least three points is known, then the intersection of the three circles around the access point can yield the location of the tag and hence the object the tag is affixed to. The problem with simple triangulation is when a signal is blocked or reflected - position accuracy can be seriously degraded or becomes impossible to determine. CSL compensates for this by greatly improving upon a simple triangulation process, which we explain in the box below. Fair warning: it's a little technical.

For the expert audience:
The basic principle of operation is the total time of travel between the tag and the anchor is multiplied by speed of light to calculate the total distance of travel. This number is divided by 2 to determine the actual distance between anchor and tag. The CSL system further refines this by accounting for hardware latency and using probabilistic positioning algorithms that apply Bayesian statistics. This improves upon pure triangulation alone when calculating the location of an object. These use given observations, initial observations (made during the site setup or 'characterization process'), and prior observations (where was the tag was last observed). The overall quality of location data varies depending on how often the tag transmits, the number of readers (anchors) as well as the environment. The software can determine the X, Y coordinates, heading, and even speed. The average accuracy with a properly setup system is 1-2 meters (approximately 3-6 feet).

The location engine software is included with the hardware at no additional cost. This is extremely price disruptive to the market as other RTLS vendors charge a software license that can cost between $5,000 and $50,000, not including ANY hardware. This makes the system feasible for applications where current RTLS offerings are cost prohibitive.

A demo application (pictured below) is included for educating and demonstrating the capabilities of the RTLS. CSL provides the full source code, which is written in C# with Microsoft .NET Framework 3.5 (also included). 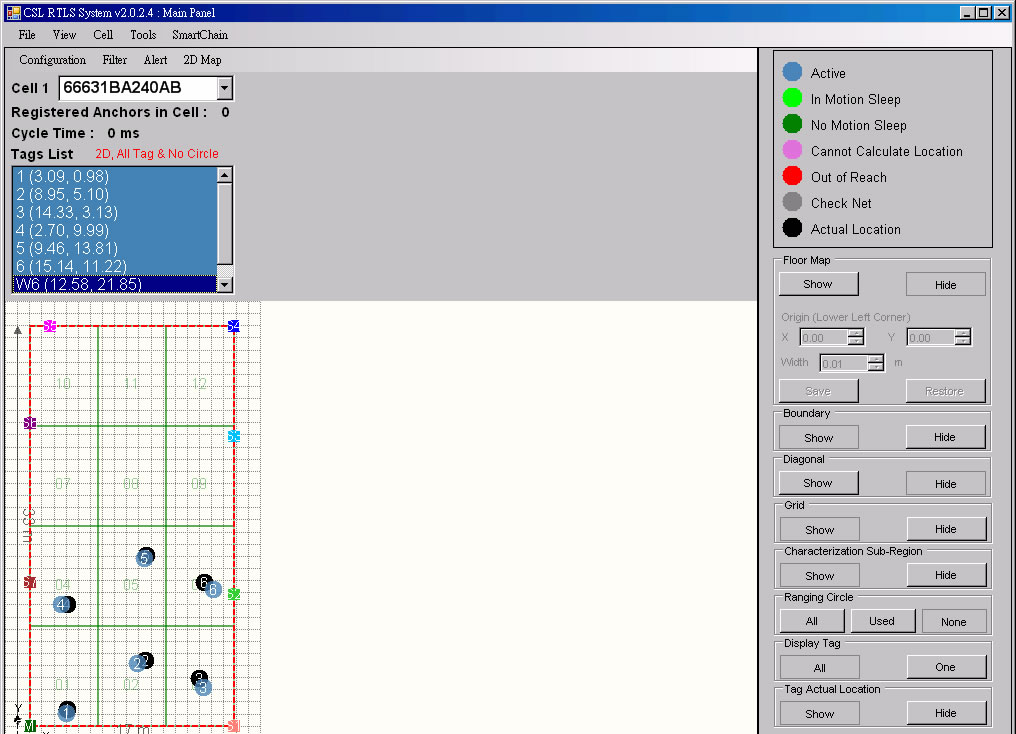 The demo software allows you to overlay a floorplan image which makes it easier to find tagged assets, and tagged personnel, relative to rooms, shelves, and other objects (pictured below). 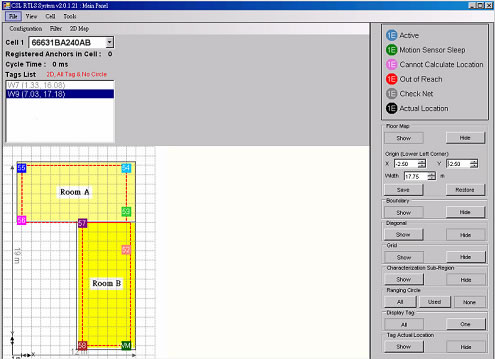 The RTLS allows you to define geographical areas, called cells, where tagged items are tracked. Each cell is bordered by at least 4 anchors, in most cases 6, and up to 8 in challenging environments such as our indoor warehouse testing environment. The maximum area of a cell is 100m x 100m. Larger areas can be segregated into multiple cells.

To optimize the performance of the RTLS even more, there are a number of automated tools in the demo application. These include:

There are also additional tools for automatic diagnostics and setup optimization.

All of the anchors are IP67 rated so they can be installed outdoors. Setting up the RTLS in our open, outdoor environment was extremely simple. In the accompanying video, we go through the entire process. Start with the master anchor and connect it to power and Ethernet. The demo software located the master anchor on the network without any problem. Each of the the slave anchors was connected to power and we ensured they had a strong communication signal with the master anchor. The distance between the anchors is measured using a laser distance meter and then entered into the demo software. We introduced tags into the read field and started reading immediately. It actually took longer to unpack the equipment (40 minutes) than it did to setup and start reading tags. Our initial accuracy was improved upon as we went through the performance optimization process tools described above. Ultimately, we achieved approximately one meter of accuracy in our outdoor test environment. 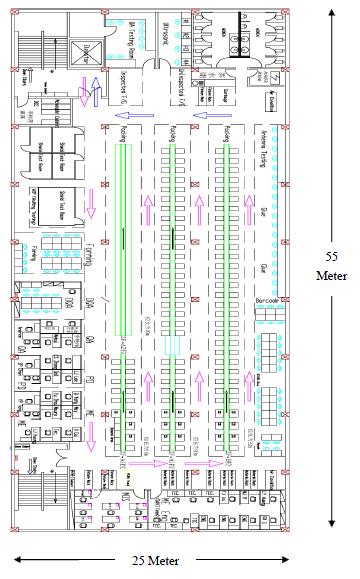 Setting up the RTLS in our indoor environment was more difficult because we selected a busy area with a lot of people, products, metal shelves, and equipment. The floorplan is shown to the right and photos are below.

The process was the same as we just described except we elected to add two additional anchors because the environment was so cluttered. Ultimately, we achieved approximately two meters of accuracy in our indoor test environment. 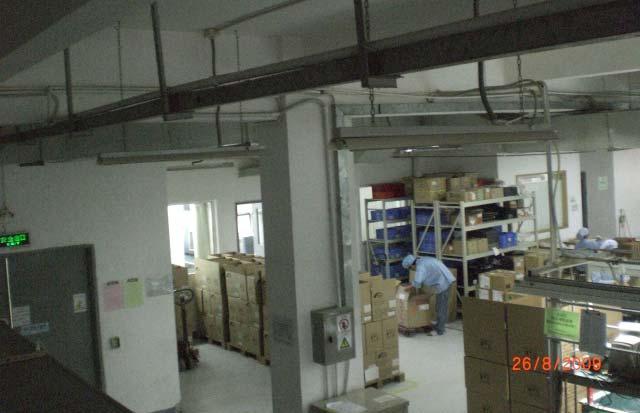 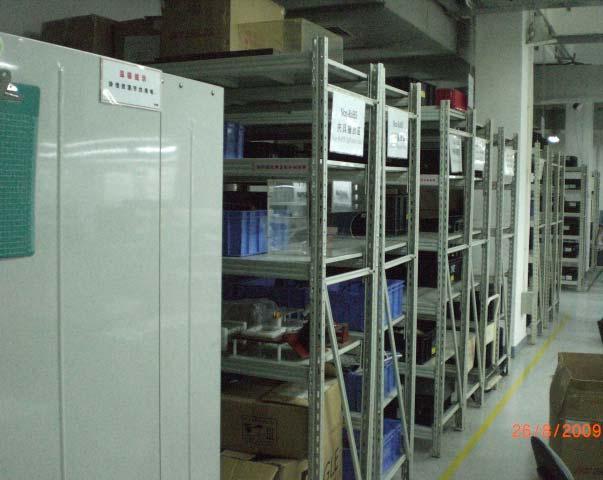 The CS3156 is an IP68 rated asset tag that uses a 2100 mAh Built-in Lithium Ion Rechargeable Battery with USB Cable.

How to Install a Real Time Location System (RTLS) 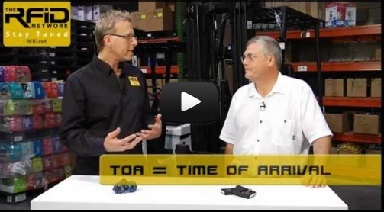